Books for children and young adults > Glimpses into Islamabad's Soul 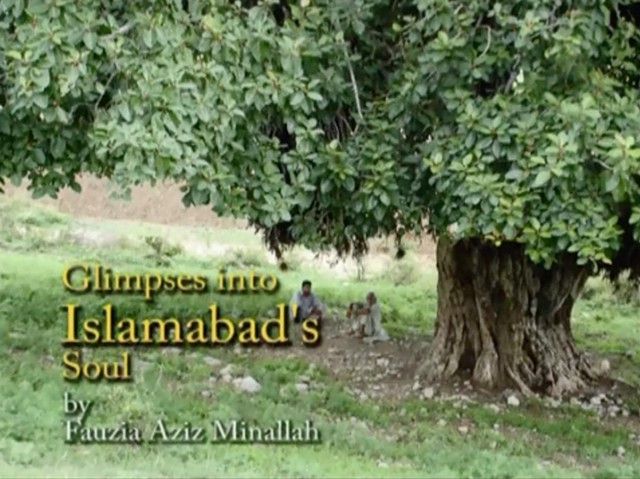 In the past travel writers have been dismissive of Islamabad, passing it off as ‘sterile’ and ‘dull’; somewhere to be got through before visiting the real Pakistan. And the local joke ‘Islamabad, twenty minutes from Pakistan’ also belittles the country’s capital city by implying it is essentially foreign to the rest of Pakistan; a soulless, high rise city full of diplomats and other feather bedded foreigners.

As Fauzia Minallah writes, Islamabad and its surrounding villages have both a soul and an immensely long and fascinating story. It is sometimes hard to locate historic sites and harder still to find information about them so I wish that I had been able to read Fauzia Minallah’s book before living in Islamabad as I know I have seen many sites around Islamabad, such as the prehistoric shelter which can be seen from the Kashmir Highway, and entirely missed the story behind them.

I would recommend any visitor to Islamabad to invest in a copy of her book, particularly if they will be living in Islamabad for long enough to get out and about and explore. The book has the best map of Islamabad and surrounding areas which I have yet seen. The map explains the city’s grid system and how it extends beyond the currently developed areas and shows the location of the places she describes in such a way that it would be comparatively easy to find them on one’s own. (Maps of the surrounding areas of Islamabad were non-existent when we lived in Islamabad which filled me with sadness as I am a very visual person.) Her book also has a very good timeline which puts the sites she describes into a historical framework.

Fauzia Minallah’s book has beautiful photos of Islamabad and reproductions of the paintings of the well-known Islamabad artist, Gulam Rasul illustrating the exceptional beauty of “the garden city” and its surrounding villages. The photography and arrangement of the art work is a tribute to Fauzia Minallah, who is a well known artist in her own right successfully exhibiting throughout Pakistan and Europe. The book is more than a tourist guide, a coffee table book or a nice memento of a stay in Islamabad but not without a message for the reader: many sites and traditional crafts are now under threat as a result of the speedy development of the capital. She is particularly concerned about lavish plans for Bari Imam and for which will destroy genuine history and put American style Disney theme parks in its place. These “show pieces” are designed to appeal to V.I.P visitors but I think the visitors would much prefer to see authentic historical sites which are well maintained. Food street in Lahore was a great success because it highlighted history and preserved a collection of fascinating historic buildings which might otherwise have been demolished, but some of the plans for ‘prettifying’ Islamabad are extremely destructive of irreplaceable heritage sites. Fauzia Minallah maintains that it would be more worthwhile to maintain and explain historic areas of Islamabad and incorporate them into development by placing them in strategically placed parks than to bulldoze priceless and fragile examples of ancient architecture. Fauzia Minallah has filled in an enormous gap by producing her book. She has not only produced very interesting and well researched descriptions of historic places around Islamabad but has identified artisans who are producing ceramic ware in Saidpur village in a way which has probably not changed greatly since the days of Alexander or earlier. She gives a particularly good stage by stage description of how a traditional wedding gharoli (water container) is produced and concludes that presently potters have given up making these unique and beautiful wedding gifts as people are unwilling to pay even Rs15 for them. The elderly potters struggle to make a living and have no younger potters who are willing to learn the art. It might be worth trying to organise apprenticeship grants for young potters from Lok Virsa, or encouraging art students to spend a semester studying traditional pottery production before the skills disappear. The potters are national treasures in themselves who should be cherished and helped. However, it would seem their traditional workshops are now under threat as they may be ‘demolished’ as part of the C.D.A programme for improving Saidpur. Besides looking at issues of heritage, and traditional craftsmen, Fauzia Minallah is concerned with protection of the environment and preservation of some of the ancient banyan and pipal trees which provided the “the tree of life” carpet motif. Sadly, some of these trees which have been providing people with welcome shade for over 1,000 years, have been wantonly vandalised by young people. Others have not been given sufficient space to grow properly. As an artist myself I share Fauzia’s sadness at the loss of these trees which are literally irreplaceable, especially in the short run. They too are part of Pakistan’s rich heritage. Her photograph of a group of boys climbing an old banyan tree and clearly having a lot of fun is particularly attractive. Fauzia gently points out the sadness of excluding poor people from public parks in the city centre, particularly as they have no other space in which to relax and (if they are children) play. I lent Fauzia Minallah’s book to my mother who was born and reared in Rawalpindi before Islamabad was built. She visited me, when I lived in Islamabad, and thoroughly enjoyed the experience as it bought back many childhood memories. She enjoyed the book as much as I did and commented that the only thing that is missing from this book are the smells!! Fauzia Minallah should brings out a pocket edition of the book in paperback for those who want to visit the places she describes. She could leave out some of the beautiful photos and artwork if necessary. Most importantly, all the members of the C.D.A should read Fauzia Minallah’s book.