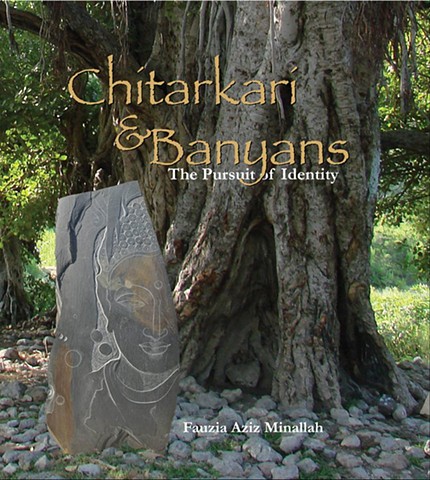 Book Review: ' Chitarkari & Banyans - The Pursuit of Identity' Symbols of life Reviewed By Zubeida Mustafa in DAWN Books and Authors THE English poet John Keats described a ‘thing of beauty’ as a ‘joy for ever’ and declared that its ‘loveliness never passes into nothingness’. That was true in Pakistan before the timber mafia reared its ugly head and the forces of consumerism and religious extremism began to pull down trees and other natural heritage. To get an idea of how these current trends have vandalised nature and ravaged its beauty take a look at Fauzia Aziz Minallah’s masterpiece Chitarkari & Banyans: The pursuit of identity. Its vivid and rich images corroborate John Keats’ observation on beauty. Its poignant narrative reminds the reader that a lot of our natural wealth stands in danger of being destroyed if it already has not been. Minallah, an artist, nature lover, environmentalist and activist, seeks her artistic identity through her excellent photography that connects her with natural elements such as the banyan tree, which was held in great reverence as a symbol of harmony and peace, and cultural legacies, such as the engraved slates that make the tombstones for the graves on Gangar hills. Hence the title of this volume. The author correctly observes that a people derive its collective identity from the geography, topography, animal and plant life and mineral wealth of its homeland. Its shared memory of its history and its culture (that includes its literary and artistic legacy) also go into the making of a multi-layered identity of people. Being an artist, Minallah is more sensitive to these components of her own individual identity that she is able to appreciate with her keen aesthetic sense. But this sensitivity also pains her immensely to see the identity factor being exploited so unscrupulously in Pakistan in the name of ideology, beautification or to promote commercial and consumer avarice. The author-cum-artist takes the reader on an exciting journey from Hazara to Islamabad and then on to Saidpur, the shrine of Barri Imam, the Buddhist caves, the Rawal Lake, Peshawar, Gilgit-Baltistan, Moenjodaro, Quetta, Lahore. Swat and Nathiagali. In some places the reader gets great insights into an artistic heritage or natural riches of different regions whereas others are vignettes. But one is introduced to beauty throughout this journey while receiving a lesson in love, peace, environment preservation and natural conservation. Minallah believes that the art and culture of a region can be saved if the people in power were to identify themselves with it. One cannot deny the truth of this observation. But isn’t it being unrealistic to expect the people in power to be really interested in saving our natural, social and cultural environment? On many occasions they themselves have been the killers of the history, geography and culture of Pakistan and have thus mutilated the identity of the people. Wasn’t it under General Ayub Khan that textbooks of history and geography were discontinued and children were fed on a concoction that went by the name of Social Studies? Even before the military government took over an attack had been launched on the indigenous languages. In Sindh, Sindhi was withdrawn as the medium of instruction. Mercifully we still have activists and committed people like Fauzia Minallah who keep challenging the powers that be in an effort to keep alive public interest in the environment and the cultural and artistic legacy of every region of Pakistan. What I did miss in the book, though, was a reference to Karachi. Probably the author didn’t live here long enough. For Karachians, as many of us like to call ourselves, the slow process of the destruction of nature, that Minallah documents, has taken place in the city that we view as our home. Does anyone remember the ‘vanished’ fruit gardens of Malir where we spent our weekends as children connecting with nature and drawing inspiration from the greenery and open spaces on the outskirts of Karachi?